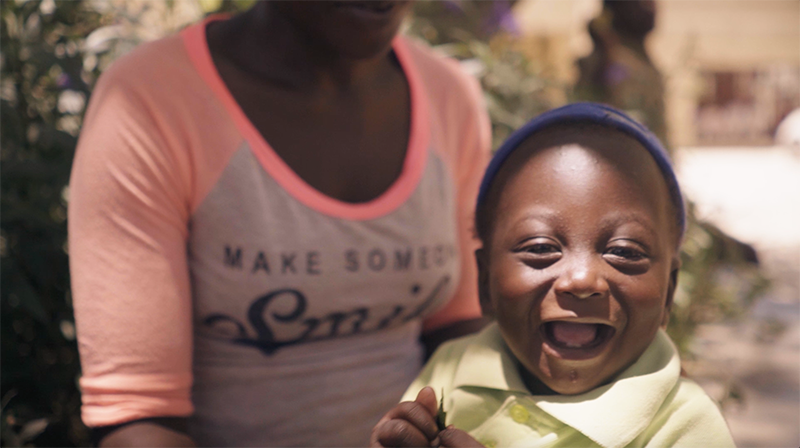 We found no shelter from the heat underneath the seven-foot boxwood. Though the trees dotted the rural landscape in Haiti, if you rated an SPF factor for them, I doubt it would fare any better than a thin coat of vegetable oil in blocking the sun.  Worse, when the air moved, it felt like a convection oven fan blowing hot air over the warm air.

I was in Haiti as part of a production crew to capture the story of how MAP International's medicines made a difference in the lives of people who had none.  Three days into a busy video production project, the day moved oh-so-slowly. That was the only pace the heat would allow. 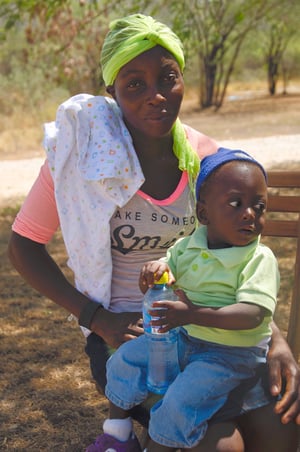 We were shooting video in a field located on the campus of MAP's partner, Love A Child, located 30 miles from Port-Au-Prince.

And, today's production involved interviewing a mother and child who benefitted from the medicine and health supplies provided by MAP.

In setting the scene, we were all attentive to our tasks. Three days into the schedule and given the rising heat of a mid-morning, we were about business in a direct, rote way.

I stood up to move my portable chair a little closer to the interview scene.  Jonny, who was conducting the interview, began with the stock set of preliminary questions.  What's your name?  Where do you live?  Tell me about your family.

The mother, whose name is Mellisia, answered these questions with ease as if she were conversing with a friend. Jonny then turned to the reason why she needed medicines and health supplies. He asked her to talk about becoming a mother.

Mellisia began talking about her first pregnancy and how she and her husband were so hopeful. She then moved to describe her profound sadness after carrying the hope of a child for six months and then losing the baby due to high blood pressure.

There were no doctors.  There was no medicine.  All she had was the loss.

She and her husband were encouraged to try again.  She described her prayers for a healthy baby. Then, months after her initial loss, she and her husband conceived again. Hope returned for the briefest of moments until in her seventh month she began to feel the familiar symptoms.  Her fear engulfed her.

Family and friends pooled what money they had to put her on a 'tap-tap' and carry her 40 miles to the closest hospital. Imagine 40 people piled into the back of a decked-out Toyota pick-up truck - a 1990 Toyota truck. The tap-tap was Mellisia's only transportation option.  And a ride of this distance could cost as much as a month's income.

Once she arrived at the hospital, a doctor told Mellisia that it was too late to save her baby.  She said the doctor chastised her for not coming sooner.  In so many words, Mellisia exclaimed, the doctor's words 'how dare you to be so poor.'

She and her husband returned home the following day. In despair, Mellisia said she felt embarrassed at having lost another baby. She took on the guilt of, "not being able to give her husband a child."

And then she began to describe the reception she received in her village. Our interpreter let out an audible gasp. Her hands, rose to her cheeks, covering the look of shock.

"Florence, what did she say," I asked.

We had relied on Florence and Denise for three days interviewing doctors, nurses and the people of Haiti who receive compassionate care from them. Both were excellent interpreters translating both meaning and context for the people with whom we talked.

"Donkey.  She said they were calling her 'donkey,'" Florence said.

The production team looked up at each other.  The camera was still rolling.  Mellisia continued sharing this most shocking part of her story.  At that moment, those of us who would leave Haiti in a few days and return to our American homes, we froze in the heat.

Jonny, who was conducting the interview, was seated in a collapsible metal folding chair in front of Mellisia. His eyes started to well. Ben, the videographer, rose but quickly brought his attention back to the camera viewfinder.  I looked at Florence wanting to un-hear what I'd just heard.

After losing two pregnancies, shamed because she was poor, now, in her village, she and her husband were being ridiculed and dehumanized.

Though we were each shaken by this stark revelation, without prompting, Mellisia continued telling her story. She talked about how she wanted to take her own life. One friend, just one friend, who she described as being like a sister to her, prayed with her and encouraged her.

With this encouragement, Mellisia said she and her husband reluctantly tried to have a baby again. Six months into this third pregnancy, Mellisia began to feel the symptoms.  What had happened before was sure to happen again.

A few days after she began to feel sick again, her friend came to her and told her doctors and nurses were visiting their village. Traumatized by her experience at the hospital, Mellisia told her friend she couldn't go because she did not have money to pay them or to buy medicine. Worse, she thought she was cursed and would lose another baby.

Her friend insisted she go.  At the mobile clinic, Mellisia met Sherry Burnette, co-founder of Love-A-Child.

Mellisia recalled the warmth she felt from Sherry and the group of nurses and doctors. They prayed with her. She told her she was not cursed and that they had medicine that could help her carry her baby.

Mellisia pulled the child sitting on her lap closer.  "Because of the medicine, I'm here today. And so is Frankie."

You can help bring more life-changing medicines to more people like Mellisia around the world. And NOW through June 30, your donation will be DOUBLED.

What Happens When Medicine Isn't Available

Steve's Notes From The Field: Liberia