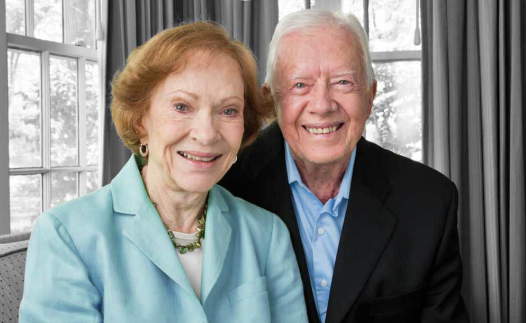 The second annual Bill Foege Global Health Awards will be presented by MAP International Wednesday, May 9, 2018, at the Delta Flight Museum.

To commend Bill Foege, a global hero best known for eradicating smallpox, the award honors individuals and organizations for their commitment to making advancements in global health.

This year’s award recognizes President Jimmy Carter and First Lady Rosalynn Carter, co-founders of The Carter Center, for their contributions in combating diseases in Africa and Latin America and restoring global health.

The nonpartisan and nonprofit Carter Center works to resolve conflicts, advance democracy, protect human rights, prevent disease and improve mental health care. The Center is a leader in the eradication and elimination of tropical diseases and took on the campaign to eradicate Guinea worm disease, forging a global coalition that has reduced cases by more than 99 percent since 1986.

“We are excited to recognize the Carters for their longtime commitment to addressing critical humanitarian needs around the world. We look forward to honoring the Carters’ efforts at improving the lives of the most vulnerable and under-served communities worldwide.”             Steve Stirling, President and CEO of MAP

MAP International is pleased to have Ed Bastian, CEO of Delta Air Lines, and Martha Brooks, Chair of CARE USA, serving as co-chairs of the Bill Foege Global Health Awards.

About Bill Foege: Dr. William Foege is a folk hero in the global health industry known for his work eradicating small pox. He was the head of the Centers for Disease Control and Prevention and also founded the Task Force for Global Health, (the second largest health-related charity in the world). The list of organizations he has led represents the ‘A’ list of global health innovators. Besides receiving the Presidential Medal of Freedom, Dr. Foege has received the Jimmy and Rosalynn Carter Award for Humanitarian Contributions to the Health of Humankind and the Ivan Allen Jr. Prize for Social Courage, in addition to numerous other awards.

About Jimmy Carter: 39th President of the United States and Founder of The Carter Center

After his Presidency, Jimmy Carter became University Distinguished Professor at Emory University and founded The Carter Center to advance peace and health worldwide. A not-for-profit, nongovernmental organization, The Carter Center has helped to improve life for people in more than 80 countries by resolving conflicts; advancing democracy and human rights; preventing diseases; and improving mental health care.

The Center has spearheaded the international effort to eradicate Guinea worm disease. The Nobel Peace Prize was awarded to Mr. Carter in 2002 for his decades of untiring effort to find peaceful solutions to international conflicts, to advance democracy and human rights, and to promote economic and social development.

About Rosalynn Carter: Former First Lady of the United States and Founder of The Carter Center

Former First Lady Rosalynn Carter has worked for more than four decades to improve the quality of life for people around the world. Today, she is a leading advocate for mental health, caregiving, early childhood immunization, human rights, and conflict resolution through her work at The Carter Center. She created and chairs the Carter Center’s Mental Health Task Force, an advisory body of experts, consumers, and advocates promoting positive change in the mental health field. Mrs. Carter emerged as a driving force for mental health when she became active honorary chair of the President’s Commission on Mental Health, which resulted in passage of the Mental Health Systems Act of 1980.