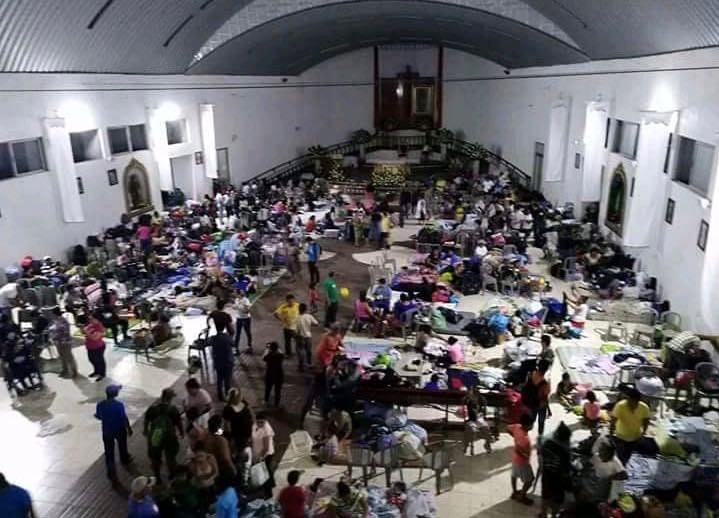 (Photo: Survivors of the Fuego Volcano eruption fill the church in Escintia, Guatemala)

As parishioners filed out of the morning church service in Escuintla, Guatemala, on a warm June day, some were complaining. Why did they have to keep sitting on plastic chairs?

Their beautiful church had no pews and their priest stubbornly refused to add them. True, pews would obscure the cross mosaic in the floor, but it seemed like a small trade off compared to the comfort of the parishioners.

Over lunch, families and friends caught up on news and enjoyed a long, leisurely meal. As was their custom, most would return to the church again for an early evening service. But when they left the restaurant and went out to their cars, they were surprised to see a layer of ash all over their vehicles.

The nearby Fuego volcano occasionally spewed ash, but not like this. The gritty sand-like substance had to be hosed off the cars or it would scratch the paint and even the windows. On that day there was so much of it that It took several attempts to get their cars cleaned.

When they went back to church and opened the doors they were shocked: The entire church was full of people, covered in ash and many bleeding from injuries. They had fled when the Fuego volcano had erupted and sought refuge in the first church they found.

More than 430 people were crowded into their church, desperately seeking shelter and help.

“It took us a moment to understand what had happened,” said Maria Claudia de Hegel, a member of the church. “Then we all went to work, helping people and doing what we could.”

They called for medical personnel to come to the church to treat the worst victims, then they helped the others clean the ash off and find new clothes and a place to sleep. They lined up mattresses on the floor of the church.

“At some point it occurred to us that if we had pews in our church we wouldn’t have been able to shelter all these people and make a place for them to sleep,” said Maria. “That was the first miracle,” she said.

Another miracle occurred when Chef Julio Cano arrived at the church with a truck full of food. An event he was catering had been cancelled due to the ash from the volcanic eruption, so he brought gourmet meals to feed both volcano victims and volunteers.

The next day he returned to help organize a kitchen to feed the people. And then he just quit his job and stayed to work free. “We couldn’t believe it,” said Maria. “This incredible chef just decided to quit his job to help feed the victims of the volcano and the volunteers who were helping.”

Another miracle became apparent soon after. The state had recently required the church to add more bathrooms to accommodate their growing congregation. “We thought it was ridiculous that we were required to have 16 toilets for our church. It seemed like such a waste. But thank God we had them when all of these people came to our church!” said Maria. In the following days a construction company donated the labor and materials to build outdoor showers, a water holding tank and other facilities to help the volcano refugees.

After weeks in the church, the state finally opened an official shelter, and the people moved into temporary housing, where they remain. And to this day, Chef Cano still cooks meals for the volunteers who go to the shelter daily to help in whatever way they can.

Recently a team from MAP International delivered Disaster Health Kits (DHKs) to the shelter to help provide comfort and meet the health needs of the those still struggling to recover from the volcano.

p.s. Read more stories like this in our latest newsletter

The Merciful End to the 2018 Hurricane Season

Before, During, and Now After Hurricane Florence