When Light and A New Life Shine Through in Kenya

When you support MAP International, you reach into the most difficult places on earth to shine your light. MAP recently received this touching story from a medical missionary team working in Kenya - it brought tears to our eyes.

We think it will touch you too.

Read how you helped bring light and hope in the most unlikely of places.

"We are based full-time at AIC Kapsowar Hospital in the high country of rural Kapsowar, Kenya. As a plastic and general surgeon, my husband and I frequently travel to even more difficult areas on the African continent to help alleviate suffering and restore function through reconstructive surgery camps.

One recent surgical camp in the Nuba Mountains of Sudan was even more rural and inaccessible than other areas where we travel. After the flight from Juba to the Yida refugee camp, then an eight-hour ride over what was mostly tire tracks serving as a road, we arrived for my husband to perform any necessary surgery.

We found that the hospital had electricity provided by solar panels. Power was used sparingly to conserve batteries. The instrument sterilizer was charcoal-operated. There were no soft-drinks or even fruits. While there, we nourished ourselves with only dried okra and beans from the market.

We took suture for cleft lips and palates provided by MAP International. 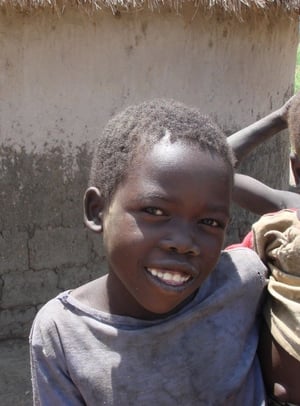 We want to share with you the story of one little patient born with bilateral cleft lip. We believe this to be the first cleft surgery performed at this hospital. His parents say he was so anxious to play with the other children. But they would run away from him and taunt him because of his cleft lip.

Thanks to MAP International, he has a beautiful new smile and a chance for a brighter childhood."

Sadly, we do not have pictures of this little boy.

The surgery described above was performed on a different child than the one pictured here. However, as this boy recovers from surgery, we imagine based on the surgeon's comments, his smile will be similar to the one on this little boy's face.

Thank you for supporting MAP International.