Responding to Neighbors in Need After Hurricane Harvey

Houston resident Brent Flaskamp and his family were among the fortunate ones. Relatively unscathed by Hurricane Harvey, they soon realized how small a margin separated them from those who lost everything. 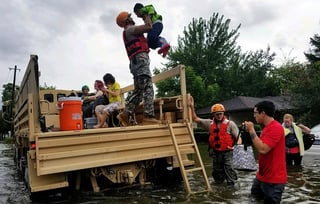 “Our church and neighborhood were untouched. But just a mile away, in a low-lying and low income neighborhood, houses were totally flooded,” he says.

When Brent, his wife, and teenage children began to respond to the needs of their Houston neighbors, the reality began to sink in. “It’s one thing to see the devastation on television, but when you see row after row of destroyed homes, it’s truly overwhelming.”

What struck Brent, as he helped tear out soaked and molding dry wall, carpet and furniture, was how small a safety net many people had.

“Most low income families had no insurance and had little savings or a way to replace the most basic items. They kept trying to save furniture that was soaked and moldy because they knew they couldn’t afford to replace it.”

As a district manager for Johnson & Johnson, Brent knew how important basic hygiene and first aid items were for people in crisis. And having worked with MAP International to supply medicines to an orphanage in Zambia he supported, “I knew MAP could help.” 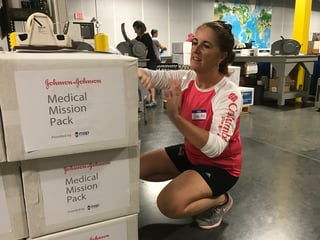 In the end, 65 boxes and DHKs were delivered to Stonebridge Church, where Brent and his family are members and where a response team was now fanning out into affected neighborhoods.

“Some people who had lost everything were living in a tent city,” said Brent. “Others were trying to reclaim their lives in houses that had been cleared down to the studs. They were so grateful for the basic supplies that could help them care for themselves and their families.”

Although Hurricane Harvey struck Houston nearly two months ago, many families are only beginning the long road to recovery. Stonebridge Church continues to respond to families in need and Brent continues to volunteer.

He’s grateful to MAP International and his employer for their generous response.

“I’ve worked at Johnson & Johnson for nearly 24 years and one of the reasons I continue with this company is the culture. It really is a company that practices what it preaches and demonstrates responsibility to patients and communities. I’m so grateful for their response to Houston and their partnership with MAP.”

MAP is continuing to respond to people in need following this devasting hurricane season.  Thank you for continuing to support those affected by these catastrophic events.