Repairing the World One Gift at a Time

Candice Dyer was moved by the images she saw on television each week as hurricane after hurricane devastated the U.S. and Caribbean islands. Rather than passively allow the news coverage to come and go, Candice felt compelled to act.

She told a friend she wanted to do something.

As a journalist, Candice knew she had to do her research. The information she discovered about MAP and the highest ratings it has received from charity watchdog organizations impressed her.

“A friend alerted me to MAP, and I was very impressed with what I learned. I was also very moved by the personal testimony of Steve Stirling.”

This information was enough for Candice to start her Facebook Fundraiser online. Her birthday was approaching, but as she looked around her small apartment, she realized she did not need more gifts cluttering her limited space. She wanted her friends to donate to MAP instead of giving her presents.

“I had never used a Facebook Fundraiser before, but when I saw that I had that option, it was a “no-brainer.” I already have too much stuff cluttering my small apartment. I really don’t need any birthday gifts. I would rather my friends donate to MAP. I was heartened that so many of them did.” 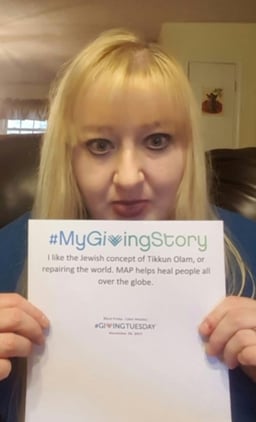 Additionally, Candice's late husband was follower of the Jewish faith. She was moved by the Jewish concept of Tikkun Olam, or "repairing the world." She firmly believes MAP helps heal people around the globe.

At MAP, we are humbled and moved by people like Candice who take the time to consider who they will donate to and how.

We are grateful for donors large and small who encourage others to give to MAP on their behalf.

MAP is most inspired by those who do this in the name of their faith. There is no greater honor.

Instead of Christmas gifts, perhaps donating the money to a charity will bring the same, if not greater joy. Either way, let it by your #MyGivingStory and share it with us!