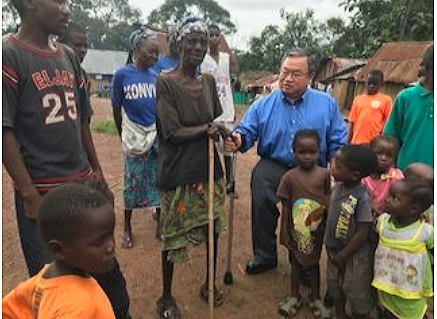 This Sunday, January 27, is World Leprosy Day, a day to raise awareness of a disease that many people believe to be eradicated from the planet.

The global elimination of leprosy was officially announced in 2000. However, approximately 210,000 new cases are diagnosed each year, and some believe millions more are living undiagnosed.

For over 60 years, on the last Sunday of January, people around the world have observed World Leprosy Day by remembering and praying for those living with the terrible effects of the disease.

Leprosy is a chronic, infectious disease that develops slowly, with an average incubation period of five years. It is caused by a bacterium, Mycobacterium leprae, and chiefly affects the skin, peripheral nerves, mucous membranes of the respiratory tract, and eyes. It is curable. But, when left untreated they can cause severe deformities and have life-threatening consequences.

As I conclude my travels in Liberia this week before heading to Cote d'Ivorie, I want to share first-hand how your support has provided hope for so many.... Two years ago, as Americans were celebrating our independence with hotdogs and fireworks, West Africa was nearing the peak of the most deadly Ebola outbreak the world has ever faced.