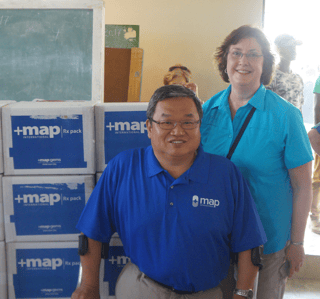 As a MAP board member, I’ve had the privilege of seeing how MAP responds to disasters.On a visit to Haiti in August I saw how MAP helped respond to the devastation caused by Hurricane Matthew a year ago and how MAP’s partners on the ground were helping those affected rebuild their lives.

Just two weeks after returning from Haiti to my home in Houston, I found myself in the middle of another disaster zone caused by Hurricane Harvey. While my own home was spared, many in my community were devastated. As members of my church began to respond to the needs around us I realized some of the lessons of dealing with disasters.

First, as Americans we are so fortunate to be in a country with a government that works and officials that want to help, not just seek bribes or use resources for themselves and their friends.

We’re also fortunate to have the infrastructure of highways and bridges that we often take for granted. When they flood we experience life without those important byways for a time, but we know they will be rebuilt. People in many developing countries have none of this infrastructure. The dirt roads they relied on are often washed away.

Second, technology makes a huge difference in responding quickly and adequately. Our church volunteers use group texts to stay in touch, identify needs, and respond with the right resources. On a larger scale, I see MAP doing this as it receives almost immediate updates from partners on the ground and tracks resources as they head to disaster zones.

Third, I see how important it is to be prepared to respond before a disaster strikes. With Hurricane Matthew, MAP was ready to ship goods as soon as the port in Haiti opened. Here in Texas, MAP Disaster Health Kits arrived just as people were seeking help at shelters. The store shelves were bare. Even if a person had plenty of money, they couldn’t buy the essentials needed such as a toothbrush and a wash cloth.

It’s hard to explain what a blessing it is to be able to be clean. MAP’s Disaster Health Kits help prevent disease and promote hygiene. But what I’ve seen is that sometimes the goods themselves are not the biggest gift. Sometimes the fact that someone cares enough to provide these things is the greatest gift. I’ve watched people begin to weep when someone gives them even a simple meal or something to relieve their suffering.

As we continue to rebuild here in Texas, I know we have a long way to go. But I also know we are very blessed to be in America and I continue to pray for those in Haiti and other places in the world, where disasters create even more devastation. And I’m grateful to serve on the MAP board, knowing that we are an organization that truly cares about people’s needs.