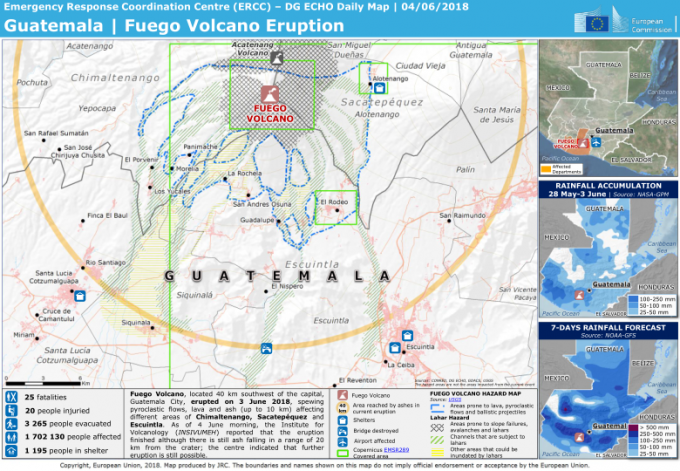 A river of boiling volcanic lava and ash overwhelmed communities 30 miles outside Guatemala City, Guatemala, Sunday displacing thousands of people from their homes and leaving 1.7 million people at risk for respiratory illness and other short and long term illness.

The Fuego volcano is one of the most active in Latin America. Tragically, this eruption is Guatemala's deadliest such event in more than a century.

As of June 5, 69 deaths have been confirmed. Many are still missing and presumed buried in the ash. Thousands have been injured and burned. 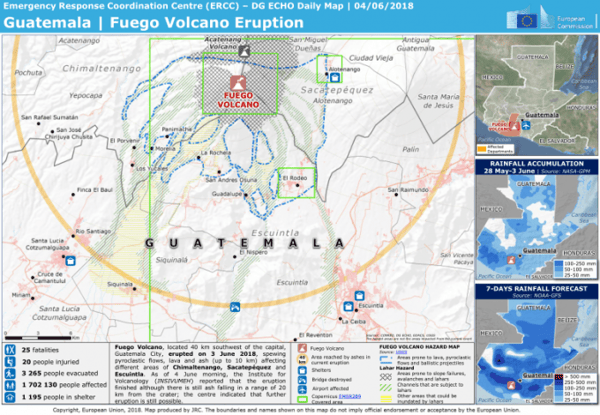 It is hard to fathom the damage caused by volcanic ash. Pyroclastic flows--fast-moving mixtures of very hot gas and volcanic matter--rushed down the mountainside and engulfed entire villages. Many residents lost all their possessions and narrowly escaped with their lives. This is the situation in many towns on the slopes of the Fuego volcano today.

MAP is responding immediately to survivors with Disaster Health Kits (DHK) and other health supplies. DHKs provide essential health items to aid a displaced person for one week. Much more help will be needed in the days and weeks to come.

One of the most serious effects of a volcanic eruption is the poisonous gases that are harmful to humans. Short-term effects commonly include irritation of the eyes and upper airways and exacerbation of pre-existing respiratory disease such as asthma.

MAP anticipates a great need for respiratory medications as the situation evolves. MAP’s partners on the ground have also indicated an immediate need for health supplies such as gloves to help the injured and to aid the search and rescue process. Medical mission packs will likely be required in the coming weeks as mission teams visit the area to help those displaced and communities rebuild.

Will you help MAP provide relief to those impacted by this disaster?

Thank you in advance for praying for those who survived this devastating volcano and for the rescue workers continuing to search for the missing.

I have said these things to you, that in me you may have peace. In the world you will have tribulation. But take heart; I have overcome the world.” John 16:33